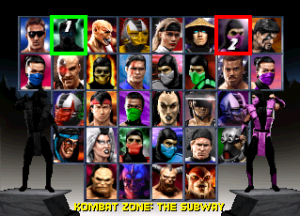 Trilogy may be 16-bit but is released for the 64-bit era. It featured content from all three games including stages, characters, and all the “-alities” from said games. It featured characters from MK II and 3, but a code allowed you to play as Raiden, Kano, and Johnny Cage from MK1 along with their classic Fatalities. For the first time you could play as all the bosses from past games such as Shao Kahn, Kintaro, Motaro, and Goro. This was an MK fans’ dream, but people would play as the bosses and spam powerful moves so it was unbalanced. Each version (PS1 and N64) had new hidden characters Chameleon and Khameleon (the latter being a female) respectively. These characters morphed into all the appropriate ninjas randomly. Trilogy also added a new meter called the Aggressor Meter which would double your speed and attack for a short period of time. This made the game play even more adrenaline pumping which helped make the game play deeper.

The gameplay from UMK3 was kept so even if you played characters from older games they were up to speed with the new game. It was awesome to play as MK1 Raiden and do super fast combos. Trilogy was like everything that was good from the all the 16 bit games and put into one. I probably played MKT more than the other games combined because I could get some of all my favorite MKs in one single game. The N64 version was the superior one because of no loading times. However, six characters were removed (all the classic MK1 and 2 characters) as well as Shao Kahn and Goro. The Sega Saturn version was the worst of the four due to coding issues, but the PC version was a perfect copy of the PS1 version.

Overall MKT allowed fans of the 16-bit MK games get one final dose before the huge release of MK4. It went down in history as an instant classic, and to this day can be enjoyed for hours and hours. 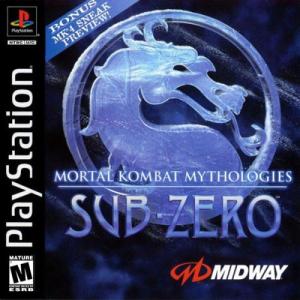 Mythologies was the first depature of the series standard fighting into 2D platforming. This was released shortly before Mortal Kombat 4 for arcade and was produced by series co-creator John Tobias. The game focused on Sub-Zero and despite highly mixed reception it sold millions of copies. The game consisted of live action cut scenes from the series actors who were shot for the digitized animations. The PS1 version was superior to the N64 mainly due to the fact that it came out later. It also didn’t feature live action cut scenes, but redone sprite stills. It was a rushed port and had downgraded quality, but other than this hardcore fans dug the new spin off, but it wasn’t amazing.

Mortal Kombat 4 was the first ever 3D Mortal Kombat game, and was done well. It featured the classic fast action game play, but in a fully 3D environment. It featured all of MK‘s classic gore and unique Fatalities, but a lot of stuff from MK3 was missing such as all the other “-alities”. MK4 also had a better time with ports because consoles were now out phasing arcades, so this was the last ever Mortal Kombat game to be released to arcade. However, the console versions of the game weren’t released until 8 months later in 1998.This gave the MK team more time and money to concentrate one just a couple of platforms, and this eventually led into a permanent trend for the team. The Fatalities in MK4 were more brutal due to the fact that everything was in 3D and could be presented better. It was also the first MK game to use a save function to store system data, and your progress on unlocked endings, as well as leaderboard stats.

The game kept stage Fatalities such as Goro’s Lair, Wind World, and Ice Pit. MK4 ditched a lot of classics in the form of new characters that didn’t catch on very well. A lot of them didn’t have the charm or appeal as the classic characters. New characters were Fujin, Kai, Tanya, Quan Chi, Reiko, Shinnok, Meat (unlockable), and Jarek. A lot of them felt like rip-offs of the older characters such as Jarek being a rip-off of Kano with laser eye and all. Tanya felt like a tribal Sonya, and Fujin was the God of Wind. All the rest felt generic and didn’t really click with most people (including me) and weren’t added into any of the main installments ever again. However, Quan Chi became a classic favorite and was the only new MK4 character that stuck out for fans. The rest didn’t really have the MK style or feel to them.

While the new roster was a let down the fighting system wasn’t with the ability to move side to side instead of forward and back. The weapon system from UMK3 was implemented as pick ups in some stages that could be used. Nothing else was really added to MK4 and it just stuck to what it new best. I loved MK4 and remember my parents buying it at Wal-Mart for me for the full $50 price. The Nintendo 64 version was superior over the PS1 due to no load times, and full FMV sequences at the end while the GBC version suffered like past handheld ports, and MK4 was the last Mortal Kombat to be released on PC. MK4 was also the last 3D game to have the classic fighting style, and it was also the only 64 bit game in the primary numbered series.

Released 2 years after MK4 and to help support the Dreamcast launch, but ultimately was one of the worst rated games on the short lived system. It was shunned for it’s old PS1 engine on the new system when the fighter Soul Calibur looked astounding on the system. It was mainly punished for it’s poor weapon system compared to Soul Calibur which were considered generic, slow, and cumbersome. New characters were introduced into 3D for the first time from older MK games such as Kitana, Mileena, Baraka, Noob Saibot, Sektor, Kung Lao, and Goro. The bigger roster was welcome, but the old game play compared to newer 3D fighters was just unacceptable at the time. This game is also one of the hardest to get since the system fizzled out quickly, and after so many bad reviews Midway halted production almost immediately. This was also the last MK game released for the 64 bit era, and a new MK wouldn’t be seen for almost 4 years.

John Tobias tried to create another adventure game from the series, but this time in full 3D. With this being the first 3D MK adventure game there was a lot of skepticism from the last game. This time you played as the not as loved Jackson Briggs (Jax), but the game had characters that weren’t in the series, and it was panned as the worst Mortal Kombat game ever made. Due to John Tobias leaving the project early, and the game even had financial issues. It was also released at the very end of the 64 bit cycle when the PS1 and N64 were almost dead and the PS2 was just coming along. The game was supposed to see an N64 release but due to the horrible reviews it was canned.

The 64 bit era was probably Mortal Kombat‘s least successful era with only one game in the staple numbered series. With one not so good adventure game, and one spin off declared the worst in the series, this era made fans think the series was done, and 3D had doomed the beloved series. Hopefully, the 128 bit era would make for the comeback of Mortal Kombat.