First person shooters are kind of hard to get right in the mobile scene. Virtual analog sticks aren’t exactly the most intuitive, but if your mechanics work right so can the controls. The better option is to allow hardware controllers and that’s exactly what Flats allows. This is also the best option for multiplayer.

Flats is a FPS with a non-existent story (that’s okay) in which you shoot down colorful bad guys with generic real world weapons. Honestly, the campaign only consists of challenges in which you must shoot a certain amount of baddies, and this number increases with each level. Very simple, and it does get old quick to be honest. While the graphics are unique and simple, they still leave something to be desired. The same level plays out over and over again, despite this type of art style having a lot of potential. All textures in the game are flat colors, but you can make out what they are by their shapes. 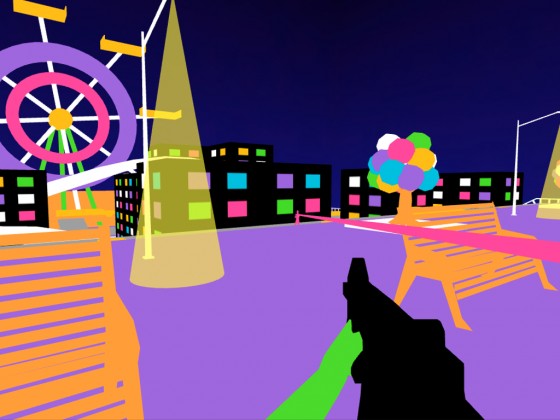 The virtual controls are not too bad, the guns handle well, and the sniping is quite satisfying. Make a headshot or “mortal shot” and you get a neat slow motion kill cam. Bullet trails are shown as colors of the bad guys that they are coming from, but the game can still get chaotic as there’s no cover mechanic or even a jump button. Hardware controls are the best option here but don’t go investing in a $60 controller for this game.

I have to say that I couldn’t test multiplayer as no one is playing online. I sat in a lobby for 20 minutes with all of two people connected and they eventually left. The game allows for several modes like Team Deathmatch, Deathmatch, Capture the Flag etc. This could be a lot of fun, but there need to be more players; hopefully, with popularity, they will start flocking in.

As it stands, Flats is a mediocre shooter idea with no one playing online. The art style is nice, but the lack of a story, solid campaign, and overall objectives just makes Flats a quick 20 minute experience and then you delete it.