I have been hyped about GoW2 ever since I finished the first game and with info slowly leaking out of Epic’s mouth and I just couldn’t help myself from getting all giddy and mushy inside. Ok enough, seriously, Gears 2 is just amazing on so many levels with tons of new multiplayer modes, weapons, enemies, environments etc. The game is just a whole new beast and old Gears fans will NOT be disappointed. First, let’s start off with the campaign, so you remember Gears one being huge and sprawling with wide vistas and beautiful architecture? Ok well, that was nothing compared to Gears 2. You really do have WIDE OPEN vistas that stretch as far as the eye can see and they are absolutely breathtaking especially on an HDTV. The graphics are still what we’ve grown to love, but with better lighting, higher resolutions, more objects on-screen and everything is just crunchier, and more big, beautiful, and hectic and ever before. 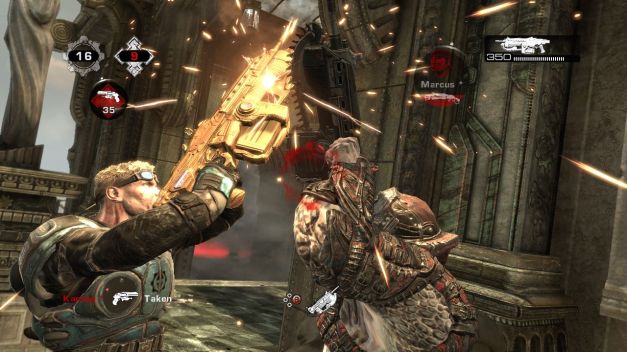 Speaking of crunching the game’s audio has been notched up and everything sounds more gruesome and brutal than ever before. Headshots pop and sound and feel more satisfying than before, curb-stomping an enemy looks more painful (and sounds it!), sawing Locust in half with the Lancer feels more powerful and just looks, feels, and sounds nastier. The whole game is like this and it feels like a true sequel instead of just Gear of War 1.5. All of your core elements are here like the great cover system, the Roadie Run (TM!!), the voice actors, characters, Locust, and story are all set in place but you are a bigger part of the whole thing and you feel more like a participant than a spectator. The story is more involved in which the Light Mass bombing failed and the Locust are coming back with their full force and Delta Squad is sent in to rip out the heart…three of them! Anyways, Dom is trying to find his wife along the way, and a few new characters are introduced but aren’t fully developed since they well…don’t make many appearances like Dizzy, Tai, Chairman Prescott, and a certain dad who will go unnamed…the story goes even further with 41 collectibles you can find that you can read and help evolve the back story some more. Gone are the COG tags people now you gotta find papers and more of them too.

Getting back to the campaign’s weapons there are about double the amount with a whole new weapon class: Heavy Weapons. You still have the Lancer, Boltok pistol, Shotgun, Longshot, Boomshot, Snub you know all those…but now you have better, crunchier, and kick BUUUTT weapons like the Hammerburst (gone is that dinky little Locust assault rifle), Gorgon Pistol (a semi-auto three-round burst Locust pistol), the Mulcher (a heavy weapons KICK @$$ mini-gun that you CRANK!), a Mortar (yes like a WWII mortar only better without all those Krauts), the Scorcher (a flamethrower that you can blind fire!), Ink Grenades (go figure), and a whole bunch others. These weapons feel powerful, sound powerful, and they are all useful and so useful in fact it’ll be hard to choose which gun you want to use half the time! Now this time around you also get to use more “vehicles” like the Centaur which is a monster truck tank…a Reaver, a Brumak, you know just cool “vehicles” like that. Yes, they all feel powerful and are just amazing to “drive”.

The campaign all together is just more riveting and more cinematic thanks to the HUGE open vistas, massive hordes of enemies, and the campaign is just perfectly built. The only problem is that it’s about the same length as the original and there’s room for a sequel. I just really can’t express how great it is to feel upfront in Gears and really drive things home with all of the awesome weapons, graphics, and audio. Of course I have to mention the new awesome Locust like the Tickers (little ticking and crawling “bombs”), the Kantus (these guys summon Tickers, and can resurrect downed Locust), Brumaks (only seen in GoW1 for the PC, and at the end of the fight at Fenix’s mansion), cooler looking Reavers, a whole “Boomer Class” like Butcher Boomers, Maulers (which have spiked shields you can carry!), Grinders (which carry Mulchers and yell “GRIND!”), Flamer Boomers etc. The whole old crew of enemies is here with great new ones and they are all fun to kill and the game is perfectly balanced.

Speaking of balanced let’s move on to multiplayer. Ah yes, good ‘ol Gears multiplayer is back with a ton of new modes along with the old ones. First off you all remember Annex, Execution, Warzone, etc. Now here are the REAL fun modes that make me really get into Gears multiplayer. Horde. Just one word: Horde. You and four people pitted against 50 waves of increasingly more difficult enemy AI. Yes, this is addictive, super fun, and you need a couple of hours on your hands if you and your teammates are really good. Getting through all 50 waves can take a good couple of hours, but boy isn’t it fun. Just imagine one guy sawing a Drone in half while the guy next to him is popping off headshots at Wretches and Boomers. You are at the enemy spawn point sticking grenades on walls and that last quiet guy is just hiding in the middle somewhere scorching Locust. Ah, is joyous and wonderful at best and you are sure to come back until you clear all 50 waves (I could only get to 36).

Now there is Wingman which is 5 teams of 2 against each other and you can only kill with executions (more on those later), or one-shot kills like a grenade or something. This is extremely adrenaline-inducing since all you can rely on is your buddy and if he dies it’s just you. Meatflag is very interesting since it utilizes GoW2’s new “meat shield” system where you can press A near a downed enemy (even in single-player!) and use them as a “human shield” as most of you would know. Other executions include the classic curb stomp, but if you press Y you can do “long executions” with other weapons like a golf club swing with the Longshot, or just use your fists and beat the guy up, but back to the multiplayer mode. In Meatflag it’s like capture the flag, but you have to bring the Locust back to your base so he’s a moving, shooting, ugly flag. This is super fun and an original twist on Capture the Flag. There are a few other modes, but these three are the 3 “blue light” modes that really stand out and are super addictive. If you haven’t noticed the player count has gone up by 2 so now there are 10 people playing instead of 8. This makes things more hectic and fun as you can tell. Thankfully the online mode plays perfectly with no server issues and there are a ton of new maps to play that is very well laid out and you’ll grow to love.

Before I close this out I have to mention the new achievement system. For once a game updates you on your achievements in-game while you’re playing without you having to pause and go into the guide. Let’s say you’re aiming for the new Seriously 2.0 achievement *cough* it’s oh nothing only 100,000 kills *cough* so you every 100 kills you get a widget will pop out at the side and update you on this. Try the new Said the Spider to the Fly (kill 10 enemies will grenade wall tags) and every 5 kills you’ll get updated. This is very helpful and is just a reminder of why you should keep playing this wonderful game. I love this new achievement system and more developers (multi-platform or otherwise!) need to take note of this. This takes full advantage of the system so please learn! Now this game isn’t perfect.

There are a few flaws such as we’ve seen the core of all of this before (GoW1 I gave a perfect 10), there are still a few bugs yet they were tweaked like the cover system. Turn the left stick a certain way and a little sketch will show up on-screen telling you what Marcus will do. While this is fine and all it’s just not perfect. There are times when you’ll want Marcus to roll a certain way, but he’ll snap against a wall. Yes, they let you change the buttons for this, but it’s still annoying. Multiplayer can be a biatch for people who aren’t very good at this. Gears veterans will smear you on the floor within seconds and will make a lot of newcomers hate multiplayer. There are mainly glitches that are only noticeable on Insane difficulty like collision issues that let enemies shoot through walls that will kill you in one hit etc. These are super minor, but we STILL have seen all of this before two years ago and I just can’t wait for Gears of War 3.