When Rock Band was released back in 2005 it kicks started a whole new era of rhythm games in your home. With Guitar Hero still using only the guitar controller, Rock Band introduced drums and mic to the genre. This brought a whole new meaning to the music genre and spawned many copycats, but none could do it better than Rock Band.

Now that Rock Band has hit the portable scene you just beg to wonder what quality the game has, and how could a game using instruments become so wonderfully executed with four buttons? Well, a disaster Unplugged is not and the following paragraphs shall prove this to you.

In short, Unplugged does some things really well with the gameplay but somehow manages to turn around and make the game Not Fun at the same time. Hold on to your desk, handrail, controller, because you have to play all instruments at the same time. Yes: Bass, guitar, drums, and mic all at the same time. I know Backbone is a bunch of jerks, but it’s not as difficult as you might think. You see all four tracks on-screen (yes singing is now a regular track) and when one starts coming down you play the phrase then switch to the next phrase using L or R. Phrases are silver borders around a certain amount of notes (each difficulty makes you play more in a phrase). If you play well enough you’ll get to go to the next phase, but be fast! If you don’t switch right away, the phrase box will move up the track and you must play all the darkened notes until you get there. In the mean time, other tracks are coming down around you, bringing down your crowd meter – and this last point is what makes the game not so fun. 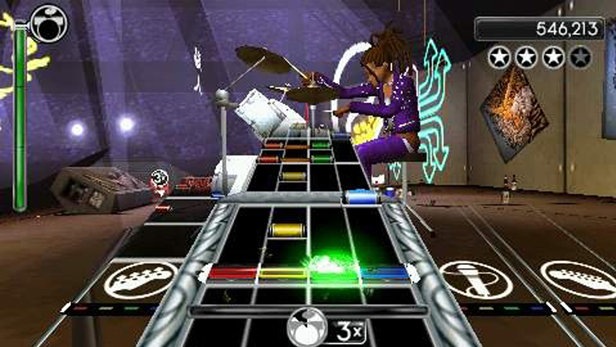 When you’re actually playing the game you use the left D-pad (red), up D-pad (yellow), triangle (green) and circle (blue) (DJ Max Portable vets will already have this down pat). As you can see there is no orange present since the game only uses four buttons, but don’t let this misguide you into thinking the game is easy because it is far from that. To make the game a tad easier on recognizing what buttons to hit together, the orange bar that was used for the kick pedal on the drums now ties notes that are apart from each other. This helps identify when to hit two notes simultaneously and thus makes it a bit easier when all these little notes are whizzing by. Overdrive (or Star Power) is still the same and can be activated with the X button, but having to perfectly play every phrase can make gaining Overdrive a little hard.

One other thing that really makes playing this game somewhat annoying is the fact that instruments drop out if you leave the track alone for too long. I don’t mean drop out as in failing (you can save the tracks by using overdrive) but in an audio sense. This is supposed to be an audio aid/cue to go to that instrument and play the phrase, but it just makes the song sound really bad.

One major disappointment is that Unplugged does not have any multiplayer what-so-ever. Yes, I know, I know – it’s alright, you can stop crying now. I am clueless as to why this decision was made because multiplayer is what really made Rock Band shine and there’s no excuse not to have it in the PSP version. Besides the missing multiplayer, the game is really vanilla in models, as it includes only your Band World Tour, Quickplay, and Training; oh and Options if you really like that. One request that Unplugged finally responded to was the ability to customize everyone in your band instead of just the musician you are currently playing. 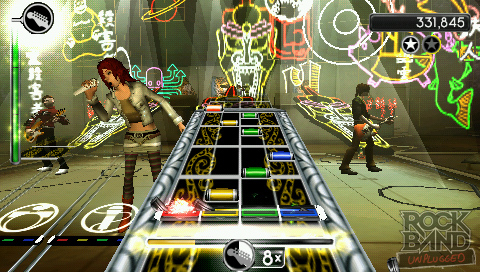 The customization is actually really shallow compared to the console versions of the game since you can’t choose clothing categories (Goth, Punk, Metal etc.), but only a few clothes for your torso, bottoms, and shoes. There aren’t as many accessories or even hair and makeup items, but this is OK since the game doesn’t look that great anyways (more on this later).

When you start your band you can name it, pick a logo (yeah you can’t even make one!), name your musicians, pick from some generic clothing, hair, makeup, and your set. I see that Backbone had the whole “portability” thing in mind so you can whip up a band and go, but some people actually see customization (like myself) as the main part of the game and can really bring the game to life with your creations.

Once your start-up a band and enter the World Tour you’ll be in familiar territory. You have mystery setlists, make a set list and various sponsored set lists that have various amounts of tracks. You can select your difficulty (Easy through Expert), but not your instrument and I really wish Backbone would have kept the game the way it was before with just one instrument track.

When you are actually playing a song you are rated on how well you did with up to five stars and a score multiplier. Landing notes will increase this multiplier up to 8x (if you activate Overdrive) until you miss a note when it goes back down to zero. Once the song is over you see your percentage of notes hit for each instrument along with how many phrases you played, attempted or failed. Eventually, you’ll unlock managers you can hire to change attributes of your play style that will earn you more cash, fans or get you gigs you couldn’t do otherwise. You unlock songs by earning a certain amount of cash, fans, and stars. In the beginning, this can be difficult since you have to get almost perfect scores on every song to start unlocking more gigs.

Sometimes before you start a gig a screen will come up and ask you if you want to gamble with your gig (in a sense) by getting 4 stars or more you can get quadruple the cash or nothing at all, if you get 5 stars we’ll double your fans and all that. It’s fun and all, but we’ve seen this before guys!

The World Tour seems to be the meat of the game and it’s nothing new or original – just the same old stuff we’ve seen from previous entries in the series, and this is a bit disappointing since it makes you feel like you’re just playing a rushed port.

There is also downloadable content available (as I write this) for people looking for more than what’s on the disc. Currently, there are 10 songs available (assuming this is an experiment by EA) for $1.99 each from the PlayStation Store. They are great songs (Disturbed-Inside the Fire, Paramore-Crushcrushcrush), so this is a great way to keep Unplugged alive and kicking. 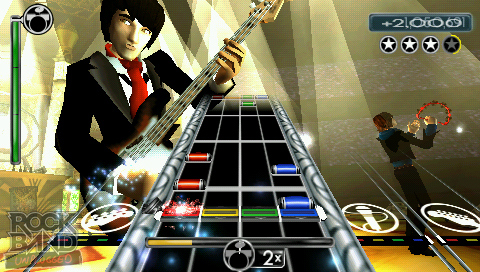 Since this is a band game how does it sound? Very good actually, as the songs are MP3 quality thanks to the UMD’s 1.8GB storage capacity, and the PSP’s memory size. There are 41 songs on the disc, featuring The Jackson 5, Lacuna Coil, Pearl Jam, Bon Jovi, Boston, Tenacious D, The Police and a ton more. Most of these songs (again another disappointment) are from previous Rock Band games, but these seem to be the best of them and almost feels like a “Rock Band: Greatest Hits”.

However, when it comes to the actual ambiance, the game fails. Crowd noise sounds like static, the menu noises sound muffled and very monotone – almost like you were playing a DS (Ha! Take that Nintendo!) and really makes the experience kind of dull aside from the music.

If you want to talk about graphics you should cover your eyes and run away because the game looks kind of ugly. The characters don’t have the realistic animations like the console versions, or the detailed textured, or the nice lighting effects. Everything looks flat, plain and really dull. The characters use the same retarded animation over and over again and it makes you wonder if the game is really a 3rd party creation. I realize the PSP has limited hardware, but C’mon they can do more than that; Kratos was able to!

While the menus look nice and crisp and remind you of Rock Band 2, I still wish there was more to the graphics and sound of the game. This is a real disappointment for me, but what saves the graphics department is that you don’t really look at the characters. Your main focuses are the tracks and the notes, which look crisp and clear.

Rock Band: Unplugged is a great departure for the series on to the portable scene. With 41 songs on disc, great controls, downloadable songs and an extensive World Tour mode there are a lot of reasons to come back to Unplugged again and again.

Don’t let the bad sides – such as mediocre graphics, poor ambiance, awkward gameplay and the wee bit shallow selection of modes – bother you: Unplugged is probably the best portable rhythm game ever made and it doesn’t even need a guitar hand grip.