The PSP is chalk full of racing games and probably more so than any other handheld or console. The reason being is that racing games are perfect for a handheld format, the PSP can display nice graphics, great physics (very important in a racer), and the analog nub is perfect for this. While there are dozens of mediocre to poor racers on the PSP Arctic Edge is not. Being one of the best looking games on the system is a real plus, but it’s the fast-paced action that MotorStorm fans have grown to love that really pulls it in the first place.

One thing I love about Arctic Edge is the menus; they’re easy to navigate and aren’t a jumbled mess. Getting in the career mode is simple since they put all the events on a rotating column that you slowly rise depending on your rank. You can place 1st, 2nd, or 3rd in each race to earn points to advance to your next rank. There are a few race types that include regular races, checkpoint races, time trials and so on. After you select your even you get to choose from a selection of vehicles and there are many types. Ranging from snowmobiles to bikes, ATVs, snow trucks, and much more you’ll have a large variety. Each vehicle handles differently on certain terrain so choose wisely.

When it comes to actually racing you’re in for a treat. You get a boost meter, but this can be used as many times as you want just as long as you don’t overheat your vehicle and blow it up. You can cool down your meter by driving through water or deep snow. I found this very unique since I can’t recall it ever being done in another racing game. If that’s not enough to entice you the sense of speed is amazing. The only problem is I wish there were some blur effects or something, but what they do works just fine. There are different paths you can take on the tracks and depend on your vehicle some may not be a wise choice. The higher paths are tended for smaller vehicles, and the lower paths are for larger vehicles. Each track is laid out with deadly obstacles that you can smash into, but a quick press of the reset button will get your back on your wheels. The core of the racing is just really fun, but it does get repetitious after awhile since that’s all there is to do. 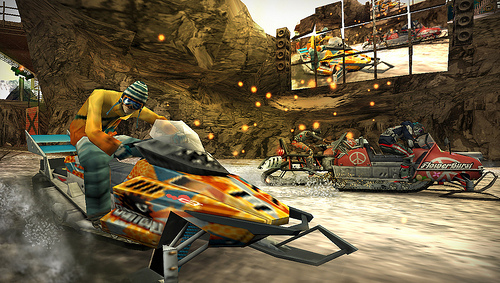 Customizing your vehicles is nothing special since it’s your bare bones basics. I really wish that if there’s going to be customization make it deep or don’t bother at all. You can unlock new parts, but all the upgrading is cosmetic only since you unlock faster cars.

The multiplayer is what will keep you coming back since there’s infrastructure. Yes, I know I know…all PSP games should have this in their multiplayer and the racing is great since the computer controlled AI is very odd. My only real hate in the game is no custom soundtracks. The game dishes out a mediocre soundtrack that can grind on your nerves after awhile so shame on you Sony for providing this. Other than that Arctic Edge is a great racing game on the PSP to pass the time.