Trine tells the tale of three heroes whose souls are tied together by the Trine and they must find a way to break apart. While the story is simple and shallow the gameplay is where it’s at. You can play as a warrior knight who has a sword and shield and is your combat guy, the thief has a grappling hook for getting across long distances and a bow for long distance kills, and the wizard can create objects to climb on and levitate objects but it a no-go during combat.

The wizard is the most interesting character since he can create blocks to climb on and bridges to cross gaps. You can find things to add to your characters to give them new abilities as well as enhance them. The combat is pretty shallow as well with just a hack and slashes everything that comes after you type play. It actually tends to get in the way of the tricky platforming and can get annoying after awhile. The game is based on physics so some physics puzzles are involved, but don’t seem implemented very well. 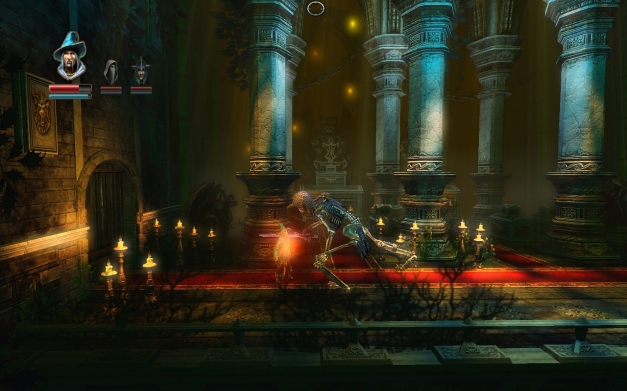 The game looks great with a beautiful fantasy art style, good voice acting, and smooth controls. There are a few glitches in the game, but these are all wonky physics issues. The game is pretty much just get from left to right without dying, but you can respawn characters at checkpoints so dying seems kind of pointless since you aren’t severely punished. In fact, if you do die you can’t use that character if the puzzle requires them so this just seems irritating. Overall the game is pretty good and worth a purchase thanks to its nice length, pleasing visuals, and good platforming segments.