2D platformers are always compared to a 20-year-old game known as Super Mario Bros. and they have every right to. That game was flawless and literally created the 2D platforming genre. Super Meat Boy is probably the only game in recent history that comes close to that kind of pixel-perfect jumping and tight responsive controls. SMB also has a ton of humor infused with it, and the game is a blast to play and is highly addictive.

You play Super Meat Boy who is trying to save Bandage Girl from Dr. Fetus. It’s a simple story, but it’s hilarious and the cut scenes are drawn beautifully. The art style is very unique and there’s so much detail infused in this game it’s nuts. When SMB gets destroyed he splatters his meaty goodness all over the walls and it stays there. He makes a splooshing sound when running and his facial animations are very funny. There are other characters you can unlock by completing warp levels and these guys are just as detailed and have their unique abilities. 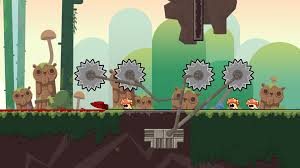 The controls in the game are what really surprised me. They’re just absolutely perfect. They are super responsive and tight and it feels like you’re controlling the characters with your fingers instead of buttons. Using the Games for Windows controller (or any other) is essential, but the keyboard works too. Jumping around corners and maneuvering through the games brutal levels can be conquered thanks to these tight controls. I’m dead serious about the game being hard because every corner and jump require extreme precision or you will die 30+ times. Oh sure, you’ll die that many times thanks to a quick reset button that has zero loading. What’s cool is after you beat the level you get to see a replay of every time you died, so every SMB goes off and you can follow them until the last one makes it. It’s awesome, unique, and makes you want to watch every replay and save them for friends to laugh at.

The warp levels bring the graphics back to 8 bit with amazing music and tend to be more challenging than the regular levels. Usually, you get to play the characters you will unlock, but gameplay varies in these levels. You can also find bandages in the regular levels, but these require extra extreme precision (if that’s possible), so this game is really for hardcore gamers only. Casual gamers will give up quick and there are no difficulty levels to set. From the frantic boss fights to the constant dishing out of new obstacles to overcome the game ramps up after the first few stages, so you must stay on your toes.

With a crap ton of charming visuals, catchy music, and perfect controls the game shines above all other 2D platformers. It wouldn’t hurt to say it’s probably the best 2D platformer in the last decade, but the brutal difficulty is very forgiving thanks to the feeling of accomplishment once you trump that level. Try beating the record time to feel even better about that victory! I highly recommend SMB to any platforming fan or even fans of the 16/8 bit eras.