Action RPG’s tend to be picked on more than JRPG’s mainly due to the fact that Western game companies tend to make them. What makes a great action RPG? Responsive controls, smooth and fluid animations, lots of loot, an interesting story with great characters, and graphics even help, but it’s the combat that really makes an action RPG shine. Divinity II has some great animations for its combat, and the controls are responsive, but it’s the underlying game revolving around this that bring a lot of flaws in Draconis.

You play as a Dragon Slayer in the first part of the game, but only to realize your fate is different than those that are chosen. As a Dragon Knight, you must seek out a way to stop the evil Damian who wants to destroy the world. Along the way you meet colorful characters that you must stop in order to get to Damian. The story is good, but it’s spread way too thin and you only get some story bits every 4-6 hours since sections can take so long, and you’re forced to do side quests. This is the #1 flaw in Draconis is that in order to do the main quests you have to be a high enough level to even defeat those enemies, so doing almost all the side quests is mandatory. You can’t even enter certain areas unless you’re a certain level because those enemies will kill you in an instant. 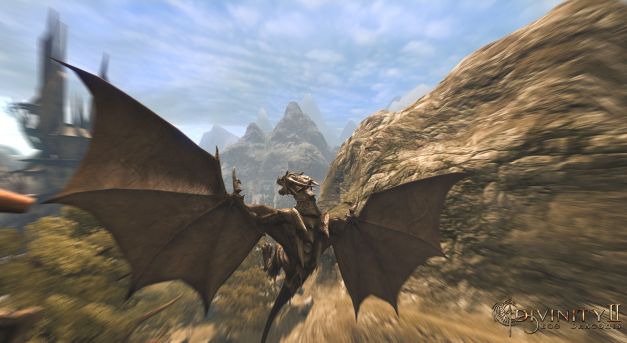 You can fight and level up as normal, but deciding between three different play styles is necessary to defeat these hard to kill enemies. Either as a Knight, Mage, or Archer you can wield all three, but you specialize in just one at the beginning of the game. You can buy and equip weapons, armor, and even craft your own potions via different characters in the game, or once you get your alchemy lab going (no spoilers so I won’t go further into that!)

The second biggest flaw in Divinity II is the fact that there is the little direction. I had to use a guide for almost every mission because the map sucks and only shows where your main quests are. The logbook has no clues on where to go so you either run around for hours clueless or use a guide. This is a huge no-no in RPG’s and I hate ones that give no direction at all. You can fast travel around the map, thankfully, but after Oblivion’s travel system I’m spoiled so this one doesn’t seem good enough.

The combat tends to be too difficult in a sense that you have to use exploits due to the fact that you can easily be overwhelmed. Towards the end of the game I encountered about 12 level 30 enemies and I was only level 31. I had to go attack them a little bit until I was almost dead (I had no potions to heal me or restore mana) so I ran outside the cave and changed into dragon form (yes you can be a dragon in this game!) and let my mana quickly generate. I then healed myself as a dragon (you share health and mana in each form) then ran back into the cave. This is the kind of irritating exploitation of game mechanics that make the game a chore and not very fun. 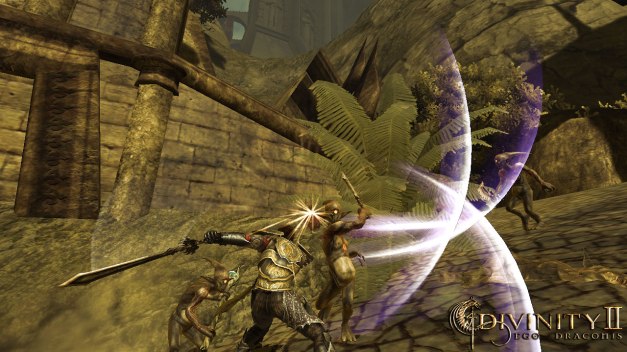 The game also kind of lacks in the traditional sense that there really aren’t any places to get potions. You can get ingredients, but I’ve always found alchemy in RPG’s pretty useless, but stores are spread so far out, and there really aren’t any towns. There’s one in the beginning of the game, but the rest of the way there aren’t any. The game relies heavily on combat, which is fine, but please give us some places to explore outside combat.

Fighting as a dragon makes you feel awesome and powerful, but you must be out in the open to fight in this form. It’s mainly in the end games third area (Orabas Fjords) that you can use dragon form, but you have to watch out for anti-dragon barriers which will kill you the instant you touch them. Divinity II really just feels like it fights against the player a lot and makes you want to hate the game, but there’s something about it that makes you keep playing. 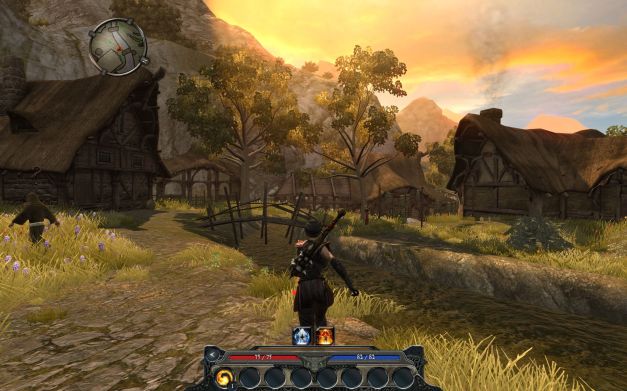 Divinity II may have a lot of flaws, but RPG fans will enjoy Draconis simply for the satisfaction of beating this difficult game. The story is interesting (if you can remember happens between each section), and some of the characters are very interesting. However, the voice acting is very spotty, but it works. Looks wise Divinity II looks great, but won’t really make your PC sweat. The animations are smooth, combat feels responsive, and the enemies are very interesting, but the above flaws may turn some away.