Back to the Future: The Game – Episode 1: It’s About Time

Back to the Future hasn’t really done well when it comes to games. There were a couple of bad games in the 8 and 16-bit era, but Telltale games finally picked up the license and injected its excellent adventure formula into the beloved series. You play as Marty McFly who has to go back in time and save Doc Brown from his own deadly fate. He get’s a message from Doc to save him, and Marty must find out how to do it with the help of young Emmet Brown. 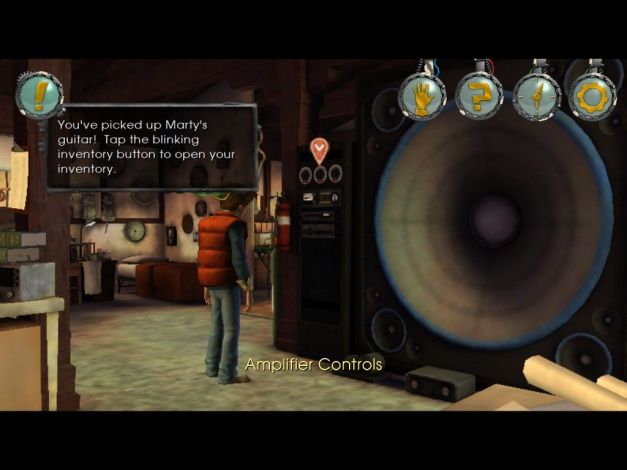 The story is original but uses the BthF license very nicely. The voice actors sound almost spot on, and everything from the DeLorean, to Doc’s dog Einstein and even Marty’s relatives, are voiced well and resemble their live action selves. It’s great to explore the BthF universe with the same clever writing and storytelling. There is a simple adventure game interface where you click around on objects and listen to Marty explain them, but the puzzles are more involved than just slider puzzles or matching symbols. The puzzles are broader and story driven, and that’s what Telltale is famous for from their Sam & Max games.

You can have items in your inventory, but you don’t just wander around and use them for every pixel in the game. It’s usually pretty obvious to use your recorder to record young Doc’s mumbling’s so old Doc can solve them. You aren’t overburdened with a ton of items that you have to constantly use a million times on everything so it’s straightforward and simple, but you do have to think a bit. One great feature to resolve pixel hunting is a button that will show every icon you can interact with. This saves time and frustration so you’re not wandering around and missing that one item that’s almost off-screen.

While the interface and interaction are smooth and simple the game is very short, and it’s still lacking some gameplay depth. I would like more cerebral puzzles, but Telltale is more about the story than anything else. The game doesn’t get super exciting until the last 30 minutes during the last two sequences. You can beat the game in one to two sittings (about 3 hours), so for $25, the game is highly overpriced and not worth the money unless you’re a die-hard BthF fan. I would wait for the full season to come out and not spend a ton of money on each episode. Also, the graphics are pretty horrible considering the nice art style. Telltale really needs to upgrade their 8-year-old engine to something more modern.