Golden Abyss is the prequel to Drake’s Fortune for PS3. This one is coming from Syphon Filter (for PSP) vets Bend Studios instead of Naughty Dog. We follow the hero Nathan Drake as he uncovers a 400-year-old massacre and travels through various dangerous locales to get there. Of course, this isn’t an Uncharted without some bad guy trying to get the fortune all for himself, but this time there are two, so this makes it a race. A new heroine is introduced as Marisa Chase, but fans will come to not like her as much as previous females in the series due to her lack of charm and charisma. The overall experience is the same as the PS3 versions, but with some added features exclusive to Vita.

The story itself doesn’t tread any new ground besides carving a new adventure. It isn’t as deep as the last two Uncharted games (Among Thieves and Drake’s Deception) because it doesn’t explore anything about Drake’s past, or push his character any. The game felt a lot like the first one, and that’s fine, but the Vita version could have been a lot more. The combat and platforming haven’t changed at all, but what’s here works well. If you are familiar with Uncharted‘s gameplay already you won’t need to learn anything new except the Vita features. You can climb around handholds as normal, but you can “paint” your path with the touchscreen which is helpful during long shimmies. You can use the touchscreen to climb ropes (as well as the rear touchpad), as well as access menus.

Thanks to the second analog stick you won’t have camera trouble, and this also includes combat. Gunfights feel just like the PS3 versions, but hand-to-hand use the touchscreen. You can press the first icon on the enemy or just use square. The final blow is laid by a swipe direction on the touchscreen. In fact, all quick-time events are done with the touchscreen. This doesn’t really add anything significant, but it is a nice touch and makes use of the technology. The tilt sensor is used to balance yourself on beams and the gyroscope is used to fine-tune your aim. These features are just subtle touches, but it doesn’t really make the game any easier.

Golden Abyss has 34 chapters, but the game can be beaten in about 4-5 hours if you aren’t looking for collectibles. There are tons of them, and without a walkthrough, you won’t find them all. This includes taking photos and doing charcoal rubs with the touchscreen. This is probably the best use of the touchscreen because it fits so well into the Uncharted gameplay and setting. The story is delivered with excellent voice acting, and the dialog is top-notch with Drake’s sarcastic and snarky comments. There are some interesting puzzles that use the touchscreen, but they are easy and not as challenging as the console versions.

The visuals are a real treat and are probably the best-looking handheld game to date on any platform ever. The lighting effects and highly detailed textures are unrivaled on any other portable device. It doesn’t look as good as the PS3 versions, but it looks very close to the first Uncharted graphics-wise. There are various locations to gawk at such as night caves, lush jungles, and dense villages. 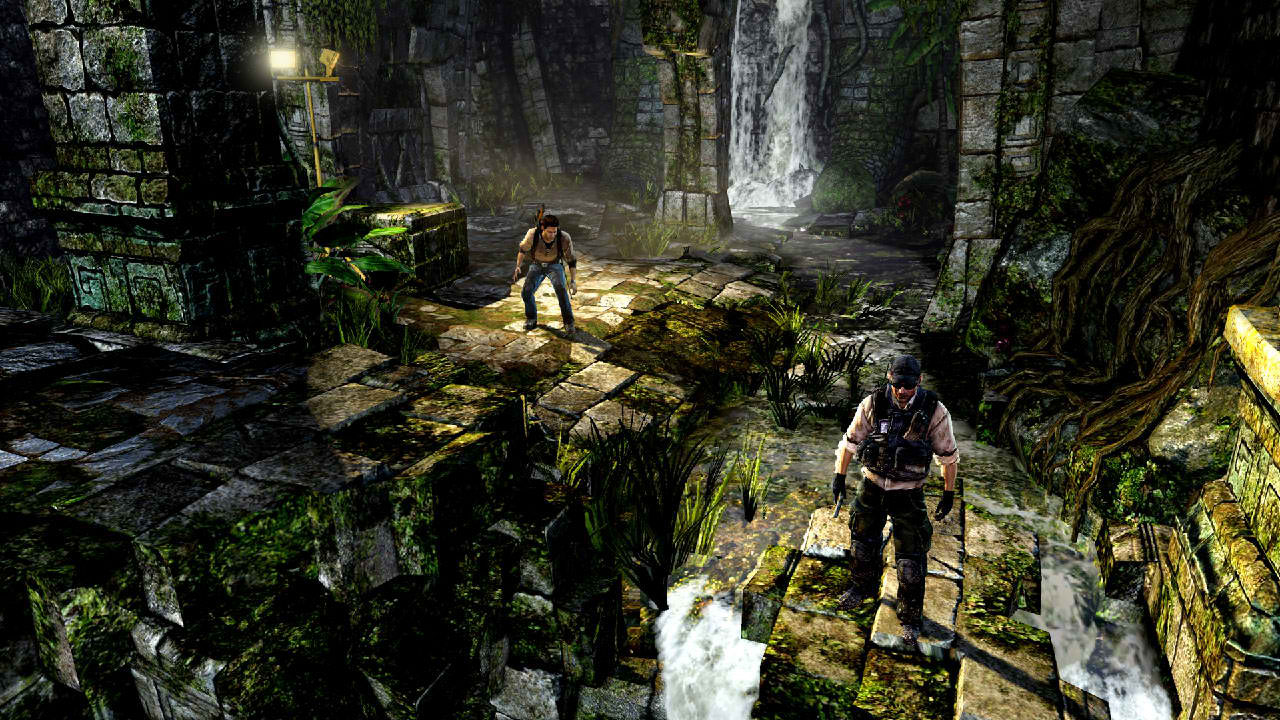 After you beat the main game there really won’t be any reason to come back except to find the collectibles and unlock trophies. The story is entertaining, but not nearly as memorable as the console versions, but this Uncharted is lacking one huge thing that brings it down so much: Epic set pieces. Uncharted is famous for this and there isn’t a single one in the entire game. No exciting train chases, or anything like that. It feels too familiar to the basic gameplay and doesn’t stray far from that path. Golden Abyss is a great Vita game, but not the best Uncharted game.