Resistance is a series that should have stopped with the third game. The series is really starting to run itself into the ground because it ultimately fails to fix issues with previous games or add enough content to deem it an individual sequel. Burning Skies is a bare-bones Resistance sequel that doesn’t really add anything new or interesting to the series. The multiplayer is average, and as it stands, Burning Skies is only good as a weekend rental.

You play Tom Riley who is a firefighter that gets caught in the middle of the Chimera war. His wife and daughter are taken away by them and he will do anything to find them. Don’t think this is some heartfelt story like Resistance 3 because it isn’t. There isn’t really that much story here because the campaign is extremely short. You can probably beat this in two long sittings or about 4-5 hours. The characters are uninteresting and the voice acting isn’t nearly as good as the console games. The way it sits now, I forgot about this game the second I finished it.

It doesn’t help that there just isn’t anything memorable in this game. It copies everything from the past games and doesn’t do anything new. The only thing new is probably the touch screen controls for secondary weapons, that’s it. Touching the screen and sliding the circle where you want projectiles to go is pretty intuitive. The Mule lets you slide back on the crossbow for bolts, and tagging enemies with the Bullseye is as simple as pressing the enemy on-screen for a second. I also liked the fire axe melee button on the side which came in handy. Even dragging grenade icons to where you want to throw them was a nice touch. One thing I also liked was that there was no health bar so you don’t have to rely on getting health packs, however, you die just as quickly. A few shots and you’re down! This game carries over the relentless difficulty from past games which I didn’t like. 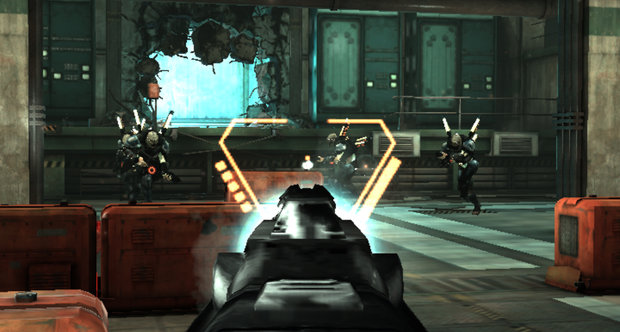 You can upgrade your weapons again, but not like in Resistance 3 through use. Picking up Grey Tech allows you to unlock 2 of 6 upgrades for each weapon at all times. Each weapon has three red and blue upgrades, but only one of each color for each weapon can be active. This system was alright, but finding the Grey Tech was a serious pain and isn’t as intuitive as upgrading through use. You can also collect hidden files in the game, but I also don’t care for this very much.

There really aren’t any bosses in the game except the terrible one at the end. Shooting red glowing objects and being able to be instantly killed in one hit is just unfair. The game, in general, is just seriously lacking any of the huge epic moments from the PS3 games and even the PSP game, Retribution. The graphics are great and some of the best on the console so far, but they could have done more with his. The visual style is pretty mundane and feels recycled from the first two games. The Chimera is all the same with only 3 or 4 different types that we have already seen. Burning Skies could have been a whole new game on its own like Retribution for PSP, but instead, it just copied from past games and added a Vita shell around it. This is a great weekend rental, but nothing really more.