Modern Warfare gets the bad rep of being the game that sheep flock to. “Only morons play it,” some people say. “The only people online are 12-year-olds”. The problem is that those are true, but it doesn’t mean that it isn’t a fun game. Sure, the game became too mainstream to everyone and their mom has played this, but it doesn’t make it is a bad game or series. What makes the game tiring is that nothing really changes. Modern Warfare 3 feels like Modern Warfare 2.5. Not much has changed from the second game other than the campaign and a visual upgrade. There are even recycled maps from the second game! 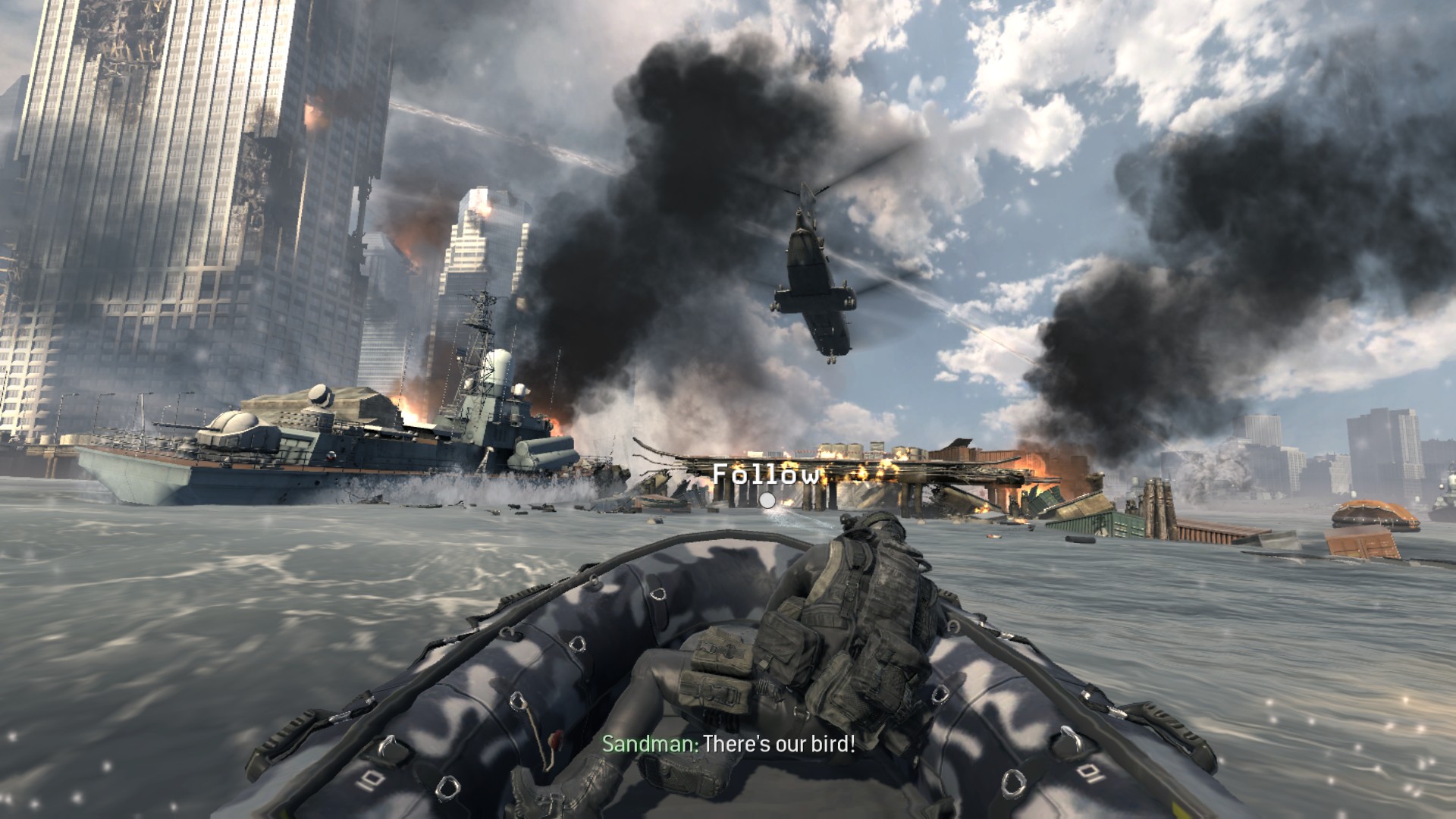 The campaign is a disappointment because it just doesn’t feel as awesome as the past two games. It feels like a gallery shooter more than ever and has very little challenge. The epic set pieces aren’t as grand as previous games and have great potential at first, but no climax ever happens. Levels are really short without the varied gameplay clips that are thrown in. The story is confusing if you haven’t followed the games until now, but you aren’t missing much. The story between Captain Price and Soap MacTavish is interesting, but it just falls flat in the end. The campaign is entertaining at best and a lot of fun, but it isn’t solid like the past two games. What you are mainly here is for multiplayer because that will keep you coming back for more.

The layout is like all previous Modern Warfare games without much change. You can customize your loadout, callsign, emblem, and unlock new items through ranking up. The only new additions really are how you score. Things like rescuing people and a few other things. To be honest, the controls and feel of the entire game haven’t really changed much. There are a few tweaks here and there but it doesn’t feel like an actual sequel. The weapons are a little different, but everything is just the same when it comes to how you unlock them. There are a few different killstreak rewards like the IMS and a few others, but if it ain’t broke don’t fix it right? There are a few different perks and that is really it. The maps aren’t designed as well as the past two games and aren’t as memorable. There are a couple of maps in here from MW2 like the Airport map which is a classic, but the others have to just grow on you. There are a lot more modes in this one, but I was missing the modes from Black Ops which I felt should have been included. One in the Chamber was a favorite of mine, but the whole money system from Black Ops is also missing. I would rather buy upgrades than wait to unlock them, but what can you do?

The graphics received a huge upgrade and look decent on PC, but look pretty bad on the consoles. There’s a slight texture upgrade, some SSAO effects, and anti-aliasing but they are all very minor. You don’t need a powerful rig to run this game maxed out. There are a few cool scenes in the campaign, but overall this doesn’t feel like a true sequel, but more of an expansion. Multiplayer is super fun and most players will pour dozens of hours into the addictiveness of it. There are a few complaints about the multiplayer such as when you start. You are fighting people who are level 80 prestige and have all the best stuff, so don’t get discouraged. Quick scoping is a thing people complain about where you can look down your scope almost instantly which is considered cheating by some. They fixed this by making it a perk, but if you play Battlefield 3 you will notice the difference.

Modern Warfare 3 has a lackluster single-player campaign, and not much has changed in multiplayer. The new maps are fun but not as memorable as past games. There are a few tweaks here and there, but no major changes you should expect. For the low price these days it is well worth it, but just don’t buy it expecting a cinematic campaign, and tons of multiplayer changes like you saw from Modern Warfare 1 to 2. I also have to say that there are a surprisingly large amount of cheaters and hackers due to the lack of dedicated servers, but this only seems to happen at night. Still worth a purchase.