Adventure games have mostly evolved into the choice based heavily story driven experiences. We’ve seen this in the past with games like Beyond: Two Souls, Indigo Prophecy, and Heavy Rain. Until Dawn perfects this type of storytelling with precise decision making, great characters, and intense story, and something to always look forward to. You play as seven teenagers who are staying in a millionaires cabin in the middle of nowhere Canada. They play a prank on two of the characters and they end up getting killed in the process. Until Dawn introduces multiple killers and the game becomes both a psychological horror, slasher game, and paranormal horror all at once.

It may seem like the game is biting off more than it can chew, but the pacing is done so well that the entire story and all of the choices and elements can beautifully unfold into a fantastic narrative and will keep you glued to your seat. During the entire 8 hour adventure, I didn’t want to shut the game off. The choices in Until Dawn are done better than any other game as missing just a single button prompt can mean that you change the course of the character’s fate. Most prompts include quick timing, but some require you to aim and even not to move the controller. Anywhere from jumping across ledges, climbing walls and chase sequences can mean life or death for yourself or another character.

I didn’t really know this until I missed a button press during a chase sequence and my character got killed. You can’t go back and fix it as the story moves on as intended. It really makes you think and pay attention as some choices are also which paths to take. Sometimes not making a move is the best choice as well and these butterfly effects will accumulate and the consequences will unfold throughout the game and not just the end which is very important.

There’s no basic ending or pre-rendered cutscene that all these choices lead up to, you literally play out the entire story based on choices as certain characters will die or survive and it could alter another’s fate. The webbing of this is so complex and impressive that you just get lost in it all and enjoy the show. The game has an amazing atmosphere and literally scared the crap out of me to the point where I couldn’t play the game alone. From the haunting music and sound effects to the amazing lighting effects and claustrophobic hallways. The game is full of tension and I ate up every minute as most games never feel this intense and serious.

Most of the game uses the PS4’s motion sensing in the controller as it controls the player’s head or light source. Moving the controller around will allow you to shine your light around or complete button prompts. Most major actions are detailed hand gestures that even have you turning papers over, lifting items, pushing, pulling, and bashing. It’s a great way to draw the player in and it’s done with such detail that it feels real and believable. I loved all of these as there are so many different prompts and sequences that it remains fun.

The visuals are some of the best to grace home consoles as every texture looks like the real thing, characters are so well made you can see every pore and imperfection, the lighting is amazing, and there’s so much detail everywhere. This is a fantastic looking game albeit the motion capture and character animations can sometimes feel puppetlike and don’t quite sync up sometimes. 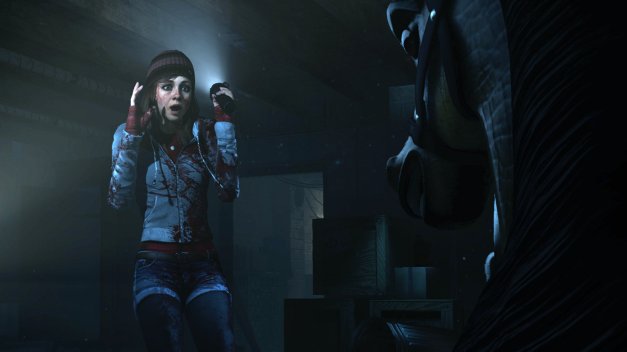 Without spoiling the story there’s not much more here I can say. This is a fantastic story that you will talk about months from now and maybe even play through again. With the minute choices made and every turn being life or death makes for an entertaining game that will scare you to death and make you jump. The game isn’t without flaws such as spotty voice acting that can come off cheesy sometimes, there’s slowdown throughout the game as it pushes the PS4 too far, there’s not much gameplay outside of controlling the characters, but it grabs and holds you down and won’t let you back up. This is exactly how horror should be done and many games need to take note.