The original Walking Dead was a fantastic adventure game. It was well written, tense, memorable, and had amazing characters. The dialog choices kept the game moving and you always felt like you were in control of every moment. Season Two adds to this while taking place moments after the end of the first game.

This time around you play solely as Clementine. Right off the bat, I can tell you that your choices from the first season hardly impact Season Two. I imported my save, but I didn’t see many changes or choices I made from Season One affect anything here. We get an all-new cast, setting, and goal for Season Two that kept me going until the end.

Clementine is a child, but her raw character shows in this season thanks to what she went through. Going from an innocent child to a hardened killer isn’t easy, and it makes Clementine such a likable character. Adults respect her for how mature she is, she can make adult decisions, but she still has some vulnerabilities that a child would have at her age. The new characters come across strong, just like Season One, but I felt a slight disconnect from them. Something about these new characters didn’t quite click as well. A lot are introduced early on so this might be the reason.

Throughout the game, we are seeing Clem get to a word-of-mouth safe haven called Wellington as on the way she meets new friends, makes new enemies, and has to escape dire circumstances. I feel that this time around the game is more of an interactive movie rather than a game. There are hardly any gameplay moments and there’s zero puzzle solving. The action sequences are somewhat entertaining, but the horrific moments of terror are far and few between this time around. The few spots you can walk around an area feel pointless as all you do is go to the only interactive object to progress. Gameplay is seriously lacking here, but that’s not really a bad thing.

The dialog options are still strong and many choices had me wanting to go back and change my choice, but that’s good. I always thought what would happen if I chose something else as some choices are designed to unfold later and some are immediate. The pacing of this game is also slower and less balanced. There are many slow moments of downtime and dialog build-up. Sometimes 20 minutes would go by with nothing but dialog options and is a stark contrast from the first game. 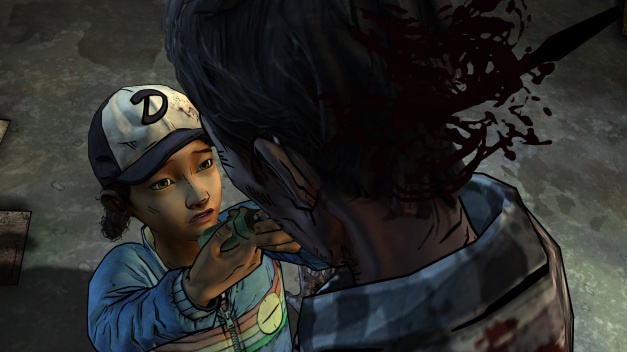 I did notice the visuals are slightly improved with better lighting and more detailed textures, but overall the game engine is seriously aging and doesn’t hold up to other games. Season Two is still a memorable game with great characters, excellent writing, and tense moments. If only it were paced better and had more gameplay.