Bullet time. While The Matrix made it popular amid pop culture, Max Payne started it all in the video game realm. You play as a cop, Max Payne, who is framed for the murder of another NYPD cop. Your wife and newborn child are also murdered and you are trying to get revenge on the people who did it. The story isn’t anything amazing, but Max Payne’s voice actor, and the well-done writing, keep you hooked long enough to find out what happened behind the scenes. The game is told in a comic noir graphic-novel style and it suits the game well. The cut scenes are imaginative and different and don’t look cheap or like the developers were trying to take shortcuts.

Outside of the story, the gameplay is all about shooting because that’s literally it. Max runs around with various weapons such as Barrettas, Ingrams, shotguns, grenade launchers, Molotov cocktails, grenades, and assault rifles to mow down the Mafia and corrupt cops. Bullet time is the main gameplay element here and when activated Max does a jump dodge in the direction you move and you can see him dodging bullets in real-time. This is actually a mechanic you must master as most situations require you to use it to stay alive. You can’t stand in one spot or you will be dead in a few hits and there’s no cover system. I had to quicksave every 2-3 minutes as well because the game is so difficult. It’s cool to jump dodge around a corner, but once Max lands there’s a delay in him getting up and you are completely vulnerable to gunfire. I had to make sure I jump dodged behind cover or across a hallway so I wouldn’t die the second the bullet time finished. You can also activate bullet time and just run your meter down so you can run and gun with it too.

There are very few scenarios in which you do more than press buttons. One scene has Max driving a crate crane around an area, but it’s nothing special, and there are some interactive objects that trigger comic cut scenes, but 95% of the game is just shooting. The weapons themselves feel good and I felt I had to switch up weapons depending on the situation to make my life easier. The locales are varied, but they are a bit too stale and boring for my taste. They don’t quite capture the noir feeling of the comic cut scenes, but there is one level early on called Ragna Rock which was a gothic cult house that reminded me a lot of Vampire: The Masquerade – Bloodlines, so that’s a good thing. The game really does feel like a first-generation PS2/Xbox game, but it’s very polished. The game flows nicely, but the difficulty is all over the place, you will die dozens and dozens of times in this game.

The visuals are clean and look nice even 20 years later. I installed a texture upgrade patch and some other things to make the game upscale to 4K nicely and play on modern hardware, and it looks pretty good. Even in the original, the facial textures are nice and very realistic, and the aesthetic of the game stands out over most shooters of its time. The voice acting is great, and I finished the game in about 7 hours. After you finish it there’s literally nothing else to do as the multiplayer mode was scrapped. It’s a fantastic single-player game that holds up well even today despite its insane difficulty and unbalanced gameplay. The story isn’t anything special, but Max is a great character to dive into and it makes for a fun evening.

Max Payne pretty much took bullet-time effects made popular by The Matrix and made them mainstream for games. Back in the day, Max Payne was a high-tech graphic noir story by Rockstar Games. It was fun, full of action, and had a great story and character. The second game did the same thing but felt too familiar with the first game. The third time around is a decade later, but Rockstar now has the tech to do what they originally wanted. Max Payne 3 is one of the best-looking games out there but also features one of the richest and well delivered cinematic stories in recent gaming history.

Max Payne has retired and is just mourning the death of his wife and kid while getting drunk every day. An old buddy from the police force stops by and recruits him for a bodyguard job in Sao Paulo protecting a very rich family in a third-world country. Things go wrong as they always do for Max, and he needs to redeem himself and set things straight after so many screw-ups throughout the game. I can’t say much more without spoiling the story, but you’re in for a treat on this one.

The game feels familiar once you start getting into it. You can dual-wield weapons or use a two-handed weapon. Bullet time is back with bullet dodge as well. You can get behind cover and use bullet time to pull off headshots and kill a dozen enemies that would normally kill you without it. Bullet dodge is fun too when you don’t have a cover or just want to knock some guys down quickly while moving to cover. My only issue here is that it isn’t as fast as previous games. Spinning around in bullet dodge is slower and feels too weighty for me. Max’s bullet-time meter only refills if you stick your head out and start killing enemies without it so there is some balance. If you get hurt you can pop painkillers, but they aren’t in abundance like in the last two games. I don’t think I ever had over 4 at one time and they are hard to come by.

That’s pretty much all there is to the action. There are many different weapons with things added on like laser sights, night vision sights, scopes, and flashlights. I really wish the gameplay was evolved a little more, but all you do is shoot everything that moves. There are some great cinematic moments that break this up like bullet-time shooting in different scenarios which are really fun. I just wish it wasn’t spread so thin because a lot of the time the game gets extremely difficult and repetitive with too many of the same type of shootouts in a row. At least the environments change all the time so you have a lot of different scenery to look at.

Max Payne 3 has some of the best camera work and cinematography in a game that I have ever seen. At certain points, the camera will snap to the last enemy in the area that is dying so you can pump more rounds into him as he falls. Then the scene will go right into a cutscene seamlessly and then right into another action sequence. I don’t think I have ever felt like playing an action movie before more than I have with Max Payne 3. The game is also really long with 14 chapters that will take about 12+ hours to beat. The story is just bursting at the seams with detail and lots of scenarios to make it not seem rushed and incomplete. 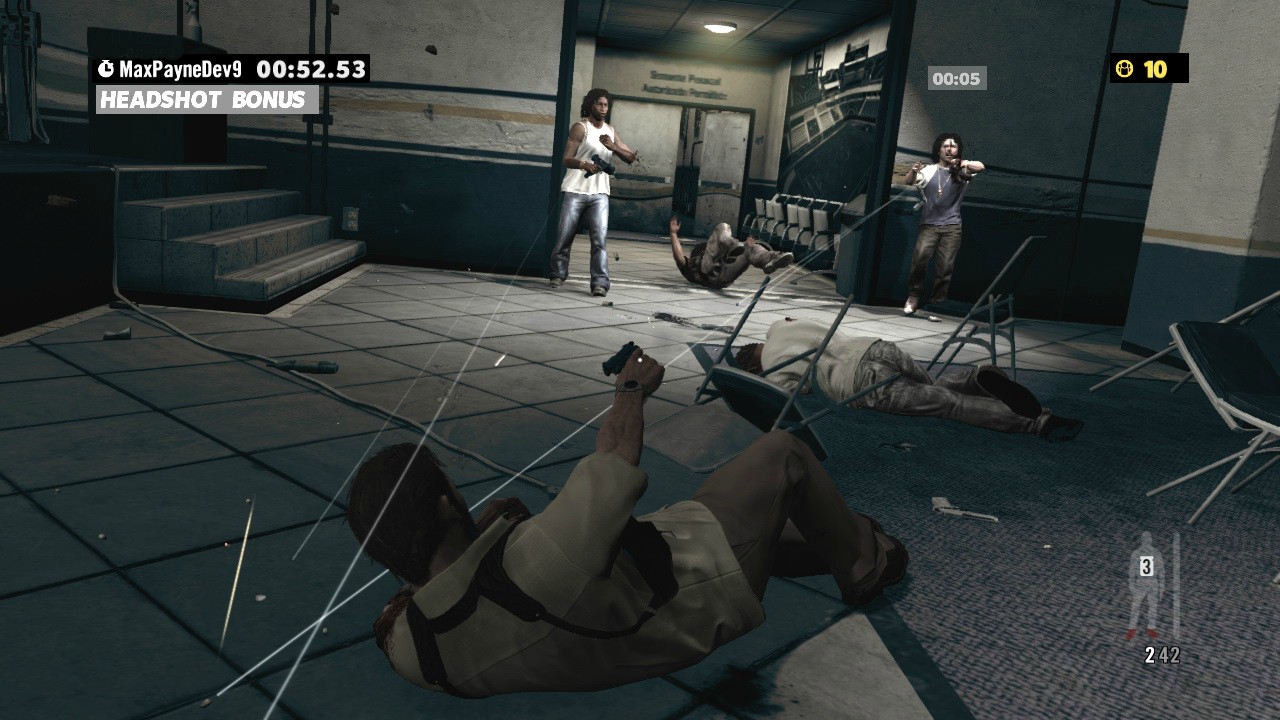 There’s a multiplayer mode that can be pretty fun as well as an arcade mode to keep you coming back. You can play through the main story again to find all the golden gun parts and clues if you want for achievements. The game also plays better on the PC due to the pinpoint precision of a mouse, and the addition of the latest DirectX 11 graphics which will require a monster rig to run at a decent frame rate. I didn’t find any major problems with the game, just a few annoying ones that were persistent throughout the whole game like the difficulty imbalance, some bullet time quirks, and actually a big issue with last-man-standing. If you have a pill bottle left and you die you get a few seconds to shoot that enemy and Max will automatically consume the bottle. If Max is flopping around or turned around you have to wait for the reticle to automatically face the enemy. If you are out of ammo you’re screwed. Sometimes objects will be blocking your shot and you get screwed there too.

Overall, Max Payne 3 is a wonderful game with top-notch cinematography, superb voice acting, and high-end visuals. Fans of the first game will be pleased with this lengthy shooter, but the gameplay itself can be repetitive, and shallow sometimes. The cinematic bullet-time events are spread too thin, but it can be forgiven due to how wonderful everything else is. Max Payne 3 was well worth the 10-year wait, and here’s to hoping there is another one.