Ever since the entertainment industry was born man has always loved to be scared. Despite our curiosity for death we loathe it every day yet we surround ourselves with it in an ironic twist. Dead Space 2 is just a dot on the time line of horror and death in media, and we suck it up like candy. What makes Dead Space 2 quench our curiosity for horror, and pushing the human mind to its psychological limits? The story of Isaac Clarke aboard The Sprawl, and returning to the Ishimura, may hold the answers.

Isaac Clarke wakes up in a straight jacket and is being chased by Necromorphs once again. He has to destroy The Marker, but he doesn’t know how. His journey through The Sprawl is very dangerous and gut wrenching, but  I guarantee you’ll love it. The combat is pretty much the same but feels slightly tighter and a little more responsive this time around. De-limbing Necromorphs is as satisfying as ever and proves to be pretty scary and gruesome. You can now use your telekinesis module in combat such as throwing limbs and objects at enemies to kill them, but I rarely used this method.

There are a ton of weapons at your disposal but upgrading them all takes a couple of playthroughs since power nodes are harder to come by, and you really need to rely on buying them. The new weapon (there’s only one sadly) is the javelin gun which lets you launch spears at enemies and lets you impale them to walls. A secondary fire mode allows you to electrify the spear to shock nearby enemies or do extra damage. It seems a little overpowered but works well on larger enemies. 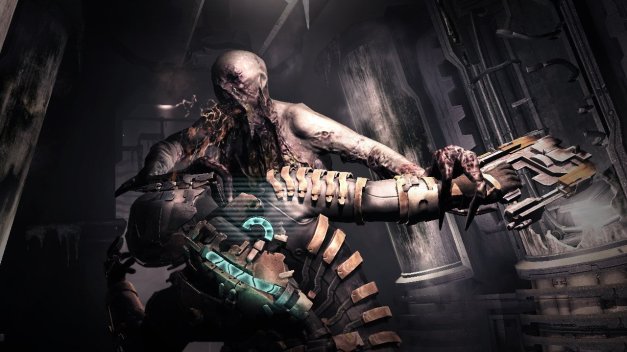 Speaking of new Necromorphs there are a few new great ones. The Stalkers are really great enemies because they hide and peek around corners and rush you. Using the force gun, or the javelin gun and using alt fire are great ways to stop these guys, or just planting mines. The Pack is screaming evil morphed children that rush you in well…packs. The force gun is the best way around these guys or the flamethrower. Another new enemy is Crawlers which are morphed infants that cry like babies and their bodies can explode. Using the force gun or flamethrower works great here too.

Despite the combat being the same, the pacing is great, and the atmosphere is extremely haunting especially during the first few chapters. The storytelling is deeper thanks to Isaac actually talking and interacting with characters. The ending is excellent, but the game runs out of steam after the first few chapters and just becomes a hallway grinding shooting fest. This isn’t to say that’s bad because the varied environments are nice to see, but I would have liked more scripted moments.

Some other key elements have changed such as zero gravity gameplay. Instead of jumping from fixed point-to-point you can move around freely now and the sections are much longer and more involved. Sometimes a whole half chapter will be in zero gravity and this includes being out in deep space. I really liked this change and is probably one of the biggest in the game.

I really feel as if the story mode was well planned out, but with the middle of the game is pretty straightforward keeps the game from getting a higher score. The game is also a lot harder and is pretty much relentless in doling out enemies at you without stopping. You really need to stay on your toes this time around and strategy is key to figuring out which weapons work in which situations. So, with the first few chapters and last few being the best the rest of the game is just mainly atmosphere, but it’s paced well and that matters a lot.

The multiplayer suite is unusual but only addictive for a little while. This isn’t like Call of Duty or Halo where you’ll be coming back for dozens of hours at a time. It plays a lot like the single player where you blast away Necromorphs, but humans control those too and they keep respawning until the objectives are met. You can collect health packs, ammo, etc, but Necromorphs are pretty relentless. There are four types you can play as, and each has their own unique abilities. Ganging up on humans is the best strategy, but sometimes the whole ordeal feels unbalanced since this is a tricky way of doing multiplayer for a game that wasn’t designed for that. The multiplayer is thrilling after awhile, but once you play all the maps and classes for a few hours you’ll be done.

Collector’s Edition: If you want to dish out an extra $20 you get a nice plasma cutter replica that lights up and is built rather nicely. You also get a pointless comic panel, and the Zealot force gun and armor, plus the soundtrack. It’s a nice package for $20 and the PS3 version gets Dead Space: Extraction (originally a Wii exclusive) that’s compatible with the Move (but you can use a controller!). Even gamers who aren’t hardcore fans will love this.