Binary Domain is a Japanese-made third-person shooter from Sega all about advanced robots. The story is actually the best part of the game as well as the characters and voice acting. Most Japanese shooters tend to suck, for some reason, or have a lot of major flaws. Binary Domain tries to remedy all this by making it feel more like a Western shooter but still doesn’t pull all the punches.

The story is about a Japanese robotics genius named Amada who creates robots that are programmed to think they are human and don’t know they are robots. They look, smell, talk, and even act human, but this is a violation of Clause 21 of the New Geneva Convention. Why Amada is doing this I can’t say without spoiling anything, but let’s just say there are a lot of nice plot twists and turns towards the end. You are a Rust Crew who is to bring Amada in alive, but it’s not as easy as you think. The characters are well-developed and each has their own unique personality that you will grow to like. Dan is known as the “Survivor” and that’s who you play as, and I actually really liked his sense of humor. 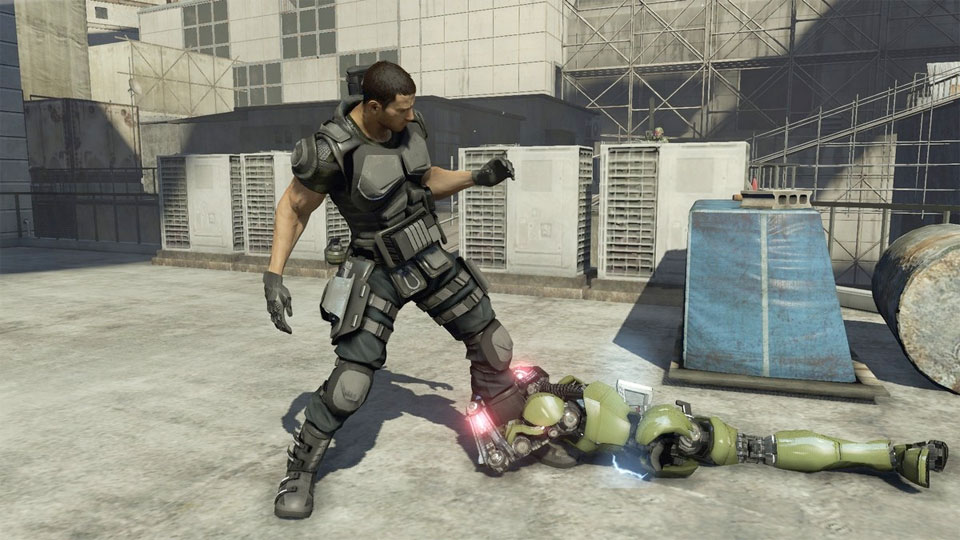 The shooting is solid enough. You get an assault rifle that you can upgrade throughout the game, but you also get to pick up secondary weapons like sniper rifles, shotguns, rocket launchers, SMGs, and probably every other gun you have shot hundreds of times before. They don’t feel any different here, and that is one of Binary Domain’s main flaws. There really aren’t any cool and unique weapons. The assault rifle has a shock burst feature that stuns enemies, but this isn’t anything really special. The cover system works similar to Gears of War, but not quite as well. When you run down hallways, Dan will stick to a wall if you get too close which is bad during timed events. You can go to shopping kiosks to upgrade your weapon as well as buy ammo, other weapons, and health kits. There is also the option to buy skill upgrades, but I found these completely useless.

These skills are dots that fill a small grid-like 10% extra health, armor, etc. I just stuck with the ones I got at the beginning of the game and never wound up changing them. That usually isn’t a good sign, and that’s because the game is pretty easy. I rarely died, and this was usually only during boss fights which there are plenty of. These boss fights are varied and actually really fun because you have to figure out where the enemies weak spot it and just blast away, but you also have to dodge their attacks. Most of the regular enemies don’t go down very easily either. You can shoot them up all you want, but you have to take off their head to keep them from crawling around. If you take off their head before taking their legs out other enemies will attack it.

The game actually features a voice command system that works with your mic, but I found this to be useless. It failed to recognize two different mics, and there really isn’t any point. Using the buttons is just as easy, but during some conversations, your squadmates will talk to you and you need to respond. If you shoot them during battle or give a wrong response they won’t listen to you as much in battle. This was completely useless because the AI is crap anyway. In a few scenarios you have to rely on them to heal you or work with you, but they usually take forever or seem to ignore you. Just turn the voice system off and stick with button inputs.

The graphics look really good, but the game has the typical Japanese sci-fi look that I am personally tired of. The menus feel like they’re from circa 1996, but sadly the game doesn’t even have a unique art style. The graphics really feel sterile and boring, but at least they look good technically.  Overall, you should just come for the decent shooting, but mainly for the characters and story because I couldn’t stop playing just to see what happens next. Every other idea in the game feels tacked on but ultimately fails in regards to execution. The multiplayer is decent at best, but you won’t be coming back for it after too long.