The past portable Mortal Kombat games quality ranged from mediocre to abysmal. Unchained is probably the best portable MK in recent history and is an excellent port of Deception. All the modes like Puzzle and Chess Kombat are here, as well as the full Krypt, Konquest, and Arcade mode. Unchained adds a few characters, plus an endurance mode.

The game plays just like Deception and the controls are just as tight and responsive as the console versions. Using each fighter’s three fighting styles is great fun, but I felt it didn’t feel as quick and fluid as the 2D games. Sure the animations are sharp and smooth, but the 3D depth takes away that lightning quick feeling between each move, and the combos are canned. Free-forming combos is a bit tougher because you have to memorize all the long combos and kind of manipulate the fighting engine to get extra long combos that aren’t there. The combos spread across two fight styles and one weapon style, but you can switch between the three on the fly. Each style has their own combos, but to do the longest you have to switch back to their default style to start it. This makes the overall play slower, but more tactical, and really makes you think before jumping around like an idiot.

The stages are multi-tiered with yellow lines that represent hazards, and red lines that represent death. Knocking opponents off these yellow lines will cause damage, but red lines cause instant death. There’s one level that is suspended in the air and the outside slowly crumbles apart. If you are on the edge at that time its instant death for you. Each stage is very unique and nicely designed with even some weapons on the stages like in Mortal Kombat 4. There are a lot of new stages here, but some old ones appear like The Cesspool, Living Forest, and The Pit.

Fatalities are intact with each character having two pre-made Fatalities. They’re as awesome as anyone remembers, but there are a few duds. A new feature is a reverse Fatality which is a Hara-Kiri. This allows the loser to perform a Fatality on themselves to steal the glory away from the winner. These are just as interesting and a very neat idea that I would like to see come back to the series. The Fatalities are only executed a bit differently. You have to enter the Fatality stance so your character stays put for the code input, but otherwise, it’s all the same. 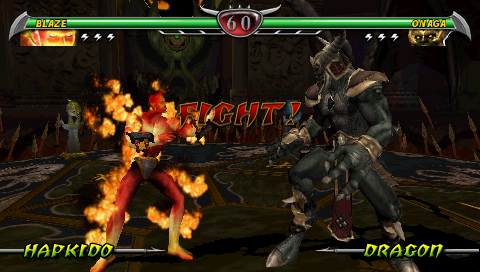 There are some new characters added to the series, like in Deadly Alliance, and most of them are boring duds. Shujinko, Hotaru, Dairou, Darrius, and a few others are boring and don’t really fit in the MK universe. Dairou, for example, is absolutely boring to play as with only three special moves and small combos. Thankfully, there are more classics like Sub-Zero, Scorpion, Ermac, Liu Kang, and Baraka just to name a few. A few new additions are Frost, Kitana, and Blaze from Deadly Alliance, but sadly they only have their one Fatality from that game. Shao Kahn and Goro are here as well from the GameCube port, but they have no Fatalities.

Chess Kombat returns where you play an MK version of chess and you fight it out when you try to take other pieces. There are two power squares on the board that gives you an extra 25% health for every square you own. There is even a spell list like Kill, Teleport, and Resurrect to add to the strategy. These games can get intense, and require a lot of thinking. I really love this mode and hope it returns to the series someday.

Puzzle Kombat is an MK twist and Street Fighter Puzzle, but at the end of each round, a Fatality is performed. Each character has a special power to use like Jumble, which mixes blocks around, Freeze, and even a move to remove a certain amount of columns. This is a really fun mode and can be played for a long time, or to take a break from fighting.

The saddest part about this game is that there is no online play. This is what made Deception so awesome and it was taken out of the game. Thankfully, the graphics look pretty decent, but the sound quality took quite a hit. The Konquest mode is probably the ugliest, and pretty boring and monotonous. The load times are on par with the PS2, and the overall menu design and feel are the same. Other than that this is one awesome Mortal Kombat package for people still rocking their PSPs.