Silent Hill 4 is a continuation of the long-running Silent Hill series that started on the PlayStation way back in 1998. As a kid I remember how incredibly horrifying SH was, and how ridiculously hard the puzzles were, thus sending the rental back due to complaints of nightmares to my mother. Fast forward to 2004 and we get SH4 that is a mediocre approach to the amazing survival horror series. For some reason, Konami changed everything for this game thus making it less fun and a MAJOR chore to play. You play as Henry Townshend who wakes up in his apartment one day with the front door chained up. You walk into your bathroom and there is a hole in it that is a wormhole to these creepy SH worlds. You are following murders of a man named Walter Sullivan and must release his soul and find out why he’s killing all of these people. The story is very interesting yet there are little cut scenes and very little dialog so most of the story is told through diary pages and memos that you pick up which is actually kind of bland and boring (and lazy on Konami’s part).

SH4 is very strange in a sense that the game uses an initial gateway between levels and you travel back and forth to heal, save, and unlock the rest of the worlds. After you finish the world you get warped back to your apartment room 302 and you are free to roam around. This is in a strange first person view and you can save (this is the ONLY save spot) and dump stuff into your trunk for later storage. You only get about 10 slots in your inventory so going back to your apartment via red holes is essential. While this isn’t so bad there’s so much backtracking and repeats of levels it will make you sick. While you’re in a level you wander around in the same SH fashion picking up strange objects and using them in puzzles. The only problem is that the memos that give you the puzzles are so unbelievably vague that you will have almost no idea what to do unless you wander around aimlessly just trying everything out. Most SH games you do this, but it’s pretty obvious where to go if you use a little bit of brain power you will get it. In SH4 things are so NOT obvious that you will completely miss it.

This is all tied together because SH4 has the worst level design ever and that is just paths that lead to nowhere. You will wander around hallways and go up and down ladders that lead to dead-end rooms or send you back to places you don’t recognize. Not only this but if you miss certain items (like the Swords of Obedience) the “boss” later on cannot be fought and there’s no way to go back. Thanks to the whole gateway system if you missed an item you can not go back unlike past SH games. There are four worlds that you must complete by finding a placard at the end of each level. In SH fashion you must complete weird puzzles by putting the right pieces in the right places and this is figured out by memos you pick up. Like I explained above they are so vague you can’t really figure out what to do except looking through a walkthrough.

After you complete the world you go back to your apartment and look through the peephole in your door and read all these pages to advance the story. After you complete the fourth world everything changes and your room becomes haunted. You must use Holy Candles that you find throughout the world and place them down in front of these demons on your walls to rid them before they kill you. I found this extremely annoying and a pointless gameplay element which just makes this SH game very weird and a bad departure from the series. After completing these four worlds you open up another whole your washroom (yeah what?!) with the four placards you go BACK through these worlds again trying to find God knows what, but the levels are continuous and you don’t get warped back to your apartment (thus not getting healed). I found this really annoying and very boring since I just spent Hell in these worlds and I have to go back?!

Now the boss fights are really stupid since they aren’t traditional SH bosses they just look like regular enemies and you must hack away at them till they fall then stab them with that Sword of Obedience I mentioned. This is both boring and stupid since if you miss a word you just have to run away from this boss until you finish the level. Now if I should mention improvements the combat is actually really great since you just lock on and whack away. You can charge attacks, but that’s about it, but if you play on a harder difficulty you’re gonna be SOL because the game can be extremely tough since they throw dozens of enemies at you at times. The only weapons in the game are melee weapons and a pistol and revolver…yeah lame where’s the shotgun? Halfway through the game, you have your neighbor, Eileen, following you around everywhere and this is extremely annoying since you can’t leave her behind and she hobbles on one leg so she’s very slow. She has to be near you before you go through doors or you leave her behind. This was a HUGE gameplay mistake and it’s probably just as bad as the level design. 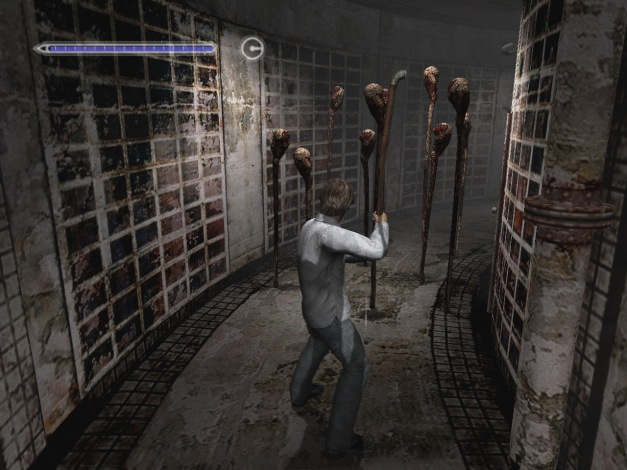 Now the only thing I haven’t mentioned is the scary factor…is it as scary as past SH games? The answer is no. The enemy designs are a little creepy, but not out of this world terrifying like the past SH games. Are the levels creepy? Not really. Sometimes you’ll see something weird in the background, but you won’t really notice it. The atmosphere is a little spooky, but nothing that’ll make you crap your pants. The past SH games scared the living Hell out of me, but SH4 didn’t really do much for the scary factor. I feel SH4 is really toned down and Konami tried to do something new and failed at it. The siren doesn’t even go off in SH4!! C’mon…If you played the hell out of the other SH games then go ahead and pick this up at bargain bin price, but don’t expect a whole lot.